THE NBA MVP RACE REVEALS THE MONSTER WITHIN

By the end of your average NBA season, choosing a league’s MVP is usually pretty easy. Most campaigns find one player separating himself to such a degree that his selection becomes self-evident well before the “voting” masses ever get to cast a ballot. Is this fun? Probably not. Is this good? Probably so. Because, in the years when the choice becomes clouded – when we must wrestle with the complexities of what greatness actually is – the demons inside of us begin to wrestle too. And our lizard brains are ultimately revealed.

And who could blame us? It’s our first instinct when faced with that which we do not understand – to get all scaly and weird. And when asked to split such microscopic hairs of greatness, it becomes clear that we don’t have a solid understanding of it. Nor do we understand our relationship to it. The reality is, for those of us who bicker about the winner of basketball’s Most Valuable Player Award, most of us don’t know the first thing about what it means to be valuable on a basketball court (except when it’s my turn to mop before rec league games).

This lack of understanding is usually the reason why – when having these debates – we start talking nonsense. Either, we rely on what we do know, and apply it to the issue at hand whether it makes sense or not. Or, we debate what is unknowable, so no one can call us on our mouth poopoo. Some classic examples include: 1) Discussing the meaning of the word “valuable”. 2) Pontificating on what it means to be a “winner”. 3) Creating bizarre, intergalactic thought experiments where the leading candidates play against aliens. (Note: I give Space Jam sole credit for Michael Jordan’s 5th MVP award.)

This is all to say, it’s super fun to argue about the NBA MVP. But, it’s also to say, that by grasping at concepts that we do understand, we’re usually advocating for ourselves more than any player. If basketball players are the monsters on the court we aspire to be, then who we align ourselves with reveals our own inner beast. The MVP race is essentially asking our basketball media – if you are Dr. Jekyll, who would be your Mr. Hyde? If you could let the beast out – who would you become???

And let me just say, sometimes the results are less than heavenly. 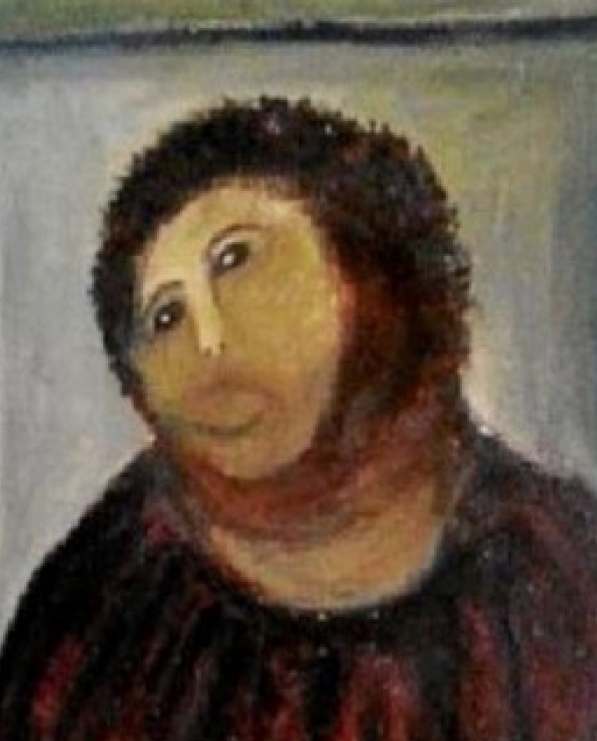 “Let he who is without sin chuck the first rock.” –Beast Jesus, Avid Basketball Fan

Because, the closest races almost always result in us casting stones at our guy’s challengers. And why not? If we are them and they are us, it makes us feel safe to think we might be able to slow down the competition with a few sharp edges. But, again, these stone throwings wind up revealing more about our own sins than that of any player. Our antiquated critiques of a great unknown (in this case, basketball excellence, not Jesus stuff) – rarely hit the target. These guys are fast, after all. And our noodle-ass tosses just end up making us look ridiculous.

These casting of stones are usually intended to teach someone a lesson. Or to say something significant about our world. But, looking back, these decisions just end up looking dumb. They don’t accurately reflect NBA history, and they become choices that most voters probably wish they could have back (at least I would hope so). Throughout NBA history, there are a handful of instances where the basketball media got caught up in their feelings about a certain player – and in doing so – showed the world how they were feeling.

Indisputable Fact #4: In America, we love capitalism, but we hate monopolies.

In ’96, Michael Jordan was so indisputably great that the basketball media had become bored of talking about how great he was. So, why not take this opportunity to vote for the hard-working man who never got the shine he deserved? That’s a good idea, right?

Not really. And it was pretty funny when all the same media members got Jordan cry face when he retired (for the first time) after the 97-98 Finals. These were the same people who were so jaded by his greatness that they had no problem taking it for granted and voting for a far inferior player just because it would be more interesting to write about. I mean, I get it – Jordan only won 69 games that year instead of 72 like the year before – what a bag of crap. But, that was still 5 games better than Malone’s best win total ever. That’s what we’re talking about here. An average Jordan season was better than Malone’s best ever. But, hey – those two weeks of magazine articles were totally worth it!

This one continues to look worse and worse by the day. And if you’ve happened to turn on a Knick’s game at basically any point this season, it’s hard to believe it even happened. Let me set the stage for you…

LeBron had just taken his talents to South Beach to become the feature member of one of the most hated teams in NBA history. Despite, not really, technically, doing anything wrong – he basically became basketball Hitler. And you better believe that a lot of media members were super butthurt about it. You better also believe that those same people wanted revenge and developed a wandering eye for Derrick Rose. He was the best player on the upstart Bulls, so naturally he got the entirety of their attention – but he was not the entire reason the Bulls were good.

Don’t get me wrong – Derrick Rose was great in 2010-11. But, the Bulls’ defense was what was truly spectacular about the team. And in that regard, well, Derrick Rose is a well-documented turnstile. It didn’t matter though. The media had already decided he was a great rebound guy (romantic-wise, not basketball-wise) and seized the opportunity to get all jilted-lover on LeBron. “This will show him!” they thought. And in doing so, they ironically showed him their most impassioned acknowledgement of his greatness.

You see, whether it was conscious or not – the vote against him was an admittance by everyone involved that LeBron is better than us. It’s why people were so devastated about him leaving Cleveland in the first place. We knew he was the chosen one – how dare he do something so pedestrian like change jobs?! Upgrading his work conditions seemed so superficial and small. So… not superhuman. It seemed less like King James and more like Janice in Accounting.

So, what would’ve been his 3rd MVP in as many years paid the price – ruining what should’ve ultimately been 5 straight for King James. Now, looking back on it in 2017, well, let’s just say that everyone who voted for Rose needs to have their ballot taken away for 5 straight years.

That brings us to Chef Curry with the rock – the most recent MVP. And, while I have no problem with Curry winning, I do have a problem with the way it all went down.

This was the first year that the media’s votes were ever public. And, it was also the first year – in the history of the NBA – that a unanimous MVP was selected. Coincidence? I think not. And, by unanimously voting for the correct candidate for the first time ever, the media inadvertently showed that it could still be all about them.

Throughout the history of the MVP voting, there has always been some person(s) who took the opportunity to vote for their local dude even though they knew it was bogus. Just to give you an idea – in the 1999-2000 season, Shaquille O’ Neal went Super Saiyan on the entire league, propelling the Lakers to 67 wins. He averaged ~30pts/14rebs/4asts/3blks and was about as close to a consensus MVP as you can possibly get. And even then – some dude was like – what about Allen Iverson tho??? The 76ers won 49 games and finished in 5th place! IN THE EAST! But, that didn’t keep some bro (from Philly no doubt) from rolling up his Iverson sleeve and filling out one of the dumbest MVP ballots ever.

This kind of thing would happen every year – especially in years with closer races. So, it’s kind of weak that in the first year we’d actually be able to see who was doing it – it didn’t happen.

My point is that Steph Curry’s unanimous MVP vote was correct, but it was also disingenuous. 2015-16 was finally the media’s chance to stand up and defend the weird votes they’d been slipping in for decades. And not one person – one(!) – had the guts to be true to themselves and vote for their local guy? I mean, come on. If you’re going to do something ridiculous for decades, at least put your name on it. Is that too much to ask?

Apparently, so. Media members didn’t want to face the criticism, so every one of them made the safe choice. Boooorrriiiiing. I would’ve loved it if at least one guy from New York had voted for Carmelo. Oh well.

So, what’s the solution? I don’t think we need one really. These things usually work themselves out and making the vote public will probably help significantly. But, if we’re willing to admit the somewhat arbitrary nature of the media’s MVP selections – that they sometimes have as much to do with media members themselves as they do the players – then why not shake things up a bit?

Like, I would love to see a year when the greats from other sports get to cast their votes for the NBA MVP race. Obviously, they’d need to be NBA fans, but it’d be interesting to see if an understanding of their own athletic greatness impacted the way they voted for a great athlete in another sport. Maybe there’s something we’ve been missing all these years. Maybe we’d see something really weird…

Or, what if the basketball media got to select the top five candidates and then every NBA player had to vote publicly for one of them? Wouldn’t that be fun? Imagine the grudges heading into the following season! Seems to me, that would create way more interesting storylines than just debating who’s best.

This isn’t me trying to be one of those people who thinks only athletes can judge other athletes. There is room for all of us – we, the plebs drooling on our hotdogs – to make evaluations. I’m just saying that we should probably admit that the media’s vote is fairly arbitrary so we can go one way or the other with this thing. Either this is a serious award and we should put more guidelines in place to ensure it’s done correctly (adding more people outside of the media, more analytics, competency tests, etc.). Or, we should just admit that it’s a PR tool used to generate interest for the league and get really creative with it. I’m happy either way.

Because, arguing about who’s best is always fun. Hell, I had a blast writing this piece! And I’d be doing it a huge disservice if didn’t cap it off in the only way that’s fair. Want to know my pick for the 2016-17 NBA MVP?

I’d definitely vote for James Harden. The number one reason? That I’m number one. I wouldn’t want to play with Russell Westbrook.