DAMMIT, KENDRICK – A Low Point for an Artist Who Is Head and Shoulders Above Everyone Else

First off, let me just say that DAMN. is a damn good album. I don’t want anyone thinking I believe otherwise.

But, I also can’t help but wonder if it’s anything other than that.

For most artists, a damn good album would be a towering success. For one of the four or five most important artists on the planet, damn good doesn’t feel like quite enough.

Sad, because on Saturday I was ready to come on here and talk about how Kendrick head-faked the whole world. That the album was a rebuke of the sentiment I just uttered above – a rebuke of our “hot take” culture where everyone finds it necessary to have an opinion about everything immediately – and true art gets lost along the way. It certainly seemed like people were playing right into his hands from the moment the album dropped.

By Saturday night, I was feeling sure that DAMN. was just another world-class throwaway by one of our greatest living artists. I was positive that the real album – the rumored NATION. – would be coming out on Easter Sunday and it would be the real statement. A resurrection amidst all the shit talk.

The horns formed by the “M” in DAMN. would give way to the halo made by the “O” in NATION. And a new work – DAMN. NATION. – would be born: 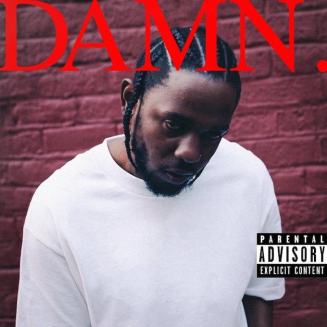 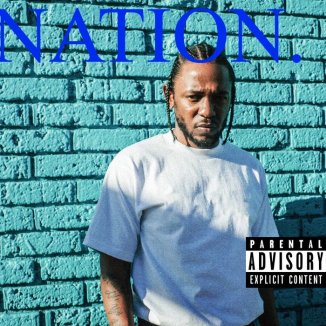 The theory suggested a dual album where dark would become light. Red would become blue. And the subjects and titles of each track would reflect a similar dichotomy:

While this is just a made-up track list for NATION. – the idea was that something similar to these 14 tracks would come to light on April 14th. All of it added up to a project constructed with so much care, so much symbolism, so much imagination – it seemed like the kind of double album that only a genius like Kendrick could create. It was a theory so otherworldly good, it made a believer out of me. And if it came to be, I was more than ready to bow down to Kendrick as the best artist around.

But, then, Easter Sunday came and went, and I was left feeling a little bummed out, a little foolish, and wondering why I believed this whole thing was ever possible in the first place.

Sure, I can charge it to the people like Sounwave (one of the album’s producers) for his cryptic tweeting:

But what if I told you… that's not the official version..

But, the truth was, I was ready to believe the theory because of a reality that was a bit more troubling. That reality was that DAMN. wasn’t mind-blowing enough to convince me it wasn’t made as a distraction from something bigger.

The real truth was, after listening to the record all weekend, I found it a bit underwhelming. Not in general terms, but on Kendrick’s. And, I think I spent those days looking for something to explain why one of the best concept album artists ever would release an album with mixtape-style shout outs, no definable story, and a lack of any real concept at all.

And that’s a hard thing to admit – that a really good album by one of the best artists around left me wishing for more. There’s no way to say it without sounding like an ungrateful d-bag. But, you can’t entirely blame me when Kendrick is the one who moved his ceiling this high.

With To Pimp a Butterfly and Good Kid, M.A.A.D. City, Kendrick dropped concept albums that were both critically acclaimed and commercially successful – a nearly impossible feat. Seriously. You know how hard it is to make a concept album that successfully creates an overarching narrative/theme/tone and still checks every box needed to move copies? A hit single, radio play, marketability – and a statement? It’s what makes a successful concept album the pinnacle of music.

It’s also why I think we need the greats out there making them. In the aftermath of To Pimp a Butterfly, even the stunting of untitled unmastered made a conceptual statement. It’s “throwaway” status mixed with its insane quality made it a record that said, “My b-sides are better than anything you’ve ever made.” And it’s a statement I prefer to DAMN. – an album with an “official release” status mired by a lower degree of difficulty and a fan theory that might be more creative than the actual album. DAMN. feels like a record that lowers Kendrick’s bars instead of raising them. And it’s why I would’ve preferred he flamed out spectacularly, than come fluttering back to Earth ever-so-slightly.

That’s all to say that this is just a preference I have based on his incredible talent. Like a great jazz musician, Kendrick’s ability to do everything gives him the ability to do anything. So, why do just another thing? His gifts are in his ability to scale up – the way he brings grandeur to every concept by attacking songs from every angle of delivery and connecting the (K-)dots between every subject he broaches. It’s what makes him the best conceptual album maker in hip-hop history – even if he never makes another one.

But, it’s also why I think he needs a concept.

DAMN. finds him leaning away from his greatest strengths by just a hair, and it’s why I found myself whispering the title under my breath. Both in disappointment and in amazement as the album melted my face off on more than one occasion. It’s not because Kendrick puts his best foot forward – it’s because Kendrick is like Tiger Woods in 2008 – he can beat the field standing on one leg.