Dave Chappelle had been gone for a minute. About 189,216,000 minutes actually. And it’s safe to say that almost every comedy fan who’s somewhere between the ages of 20-40, missed him dearly. So, when he finally stepped out of the shadows and onto live TV by hosting Saturday Night Live, people were hyped. And that undeniable hype was fueled by one question that had only been growing in his absence – what the hell was he going to say?

The episode was right after Donald Trump was elected, and a “yuge” chunk of the world was in disbelief, dismay, and total agony. But, there was Chappelle – on TV for the first time in a long time – exuding his patented, preternatural, comedic calm. He said what we all wanted to hear – that we would be okay. Only, he said in a way that only Dave could – funnier, more insightful, with more honesty. In his first televised stand-up in 12 years, the dude got a pretty bad lob in the form of the 2016 election results – and nonetheless – he tomahawked home one of the highest-degree-of-difficulty monologues ever recorded. And then he hung on the rim in the next sketch for good measure.

We were all reminded of how his hype came to be in the first place. The dude is a genius.

Much to our delight, a few months later, we get even more Dave. Not just one, but two Netflix specials! The man was back. Now, it was just a matter of kicking back and letting the good times roll. Right?

Wrong. The internet did it’s thing. And what should’ve been a glorious return became mired in pockets of social media outrage over Dave’s views on the LGBTQIA community. The think pieces followed. And almost all of them started the same way…

I think Dave is a genius, but…

I love the Chappelle Show, but…

Dave is one of the best comedians ever, but…

It was widely acknowledged that when it came to issues of race, no one provided better comedic commentary than Dave Chappelle. He was profound and hilarious, but…

For those who want to have a debate about the merits of what he actually said, I have no issue with that – and it’s not what this piece is about. It’s a debate that should be had. And it’s one that, I’m pretty sure, Chappelle himself would welcome. Personally, I’m more interested in the people who called him “lazy”, “dumb”, “going for easy laughs”, or “a bully”. For those people, I would very much like to see receipts. Because, after his SNL monologue – the one where he said something that about 99.9% of Dave Chappelle fans probably agree with – that Donald Trump is fucking terrible – I didn’t see any of those words being used anywhere.

I bring this up, not because I think Chappelle needs people coming to his defense. This controversy will probably be long gone by next week and he’ll be fine. Also, like, who gives a shit if I defend him?  No, the reason I bring it up is this – I’m curious why someone has to be a genius one moment, and dumb the next. About why we insist on it being either/or. And why it’s so hard to accept that someone can be both.

Because, in the case of Dave Chappelle, it’s hard to have it both ways. You can’t praise him for being one of smartest voices on the issue of race, and then write him off as a hack four months later. He’s the same person. It’s the same mind creating both sets of ideas. And to simply overlook that because it’s easier to categorize someone as “dumb” or “lazy”, and move on, is exactly the type of thinking that the people using those labels are almost always advocating against.

I definitely understand the desire for someone on a stage with a microphone in front of a large crowd to be the smartest person in the room. It only makes sense given the fact that all of us are there to listen to them. We always want our comedians’ views to be two or three steps ahead of own – to make us go, “Oh! I never thought of it that way!” And when they’re not, it creates that impulse that has caused some drunk-ass to stand up and shout out “You’re wrong!” at almost ever comedy show I’ve ever attended. I get it. I’ve experienced it myself. But, I’ve also kept it to myself.

Mainly, because I recognize that for some people – especially comedians(!) – humor is a coping mechanism. The things they talk about on stage are the things they’re struggling with personally. And just because they’re joking when they do it, doesn’t mean they don’t care. In fact, it most likely means the exact opposite.

For most comedians, the stage is a form of therapy. It’s a way to work things out, and while doing so, discover what they truly think about something. A lot of times these discoveries happen in the moment and that’s where their best comedy gets created. Other times, these discoveries don’t quite come to fruition and the jokes fall short. Either way – comedy is a process – and the comedians who make it are almost always a work in process themselves. And that has to be considered.

Because, let’s be honest, do you really think that Dave Chappelle would get on stage and put transgender people on blast for easy laughs? Really? We are talking about one of the funniest people who has ever lived. The guy doesn’t need easy laughs – he gets laughs too easily.  And to say that he’s going for an “easy” target is to completely ignore that “easy” has never been what Dave Chappelle is about. Not even in the slightest. If that were true, we’d be on Season 14 of the Chappelle Show and we’d all be asking why Dave is still doing Lil’ John impressions. (“Whhhhhaaaaaaat the hell happened to this show?”)

And that’s basically what I mean when I say that, “Dave Chappelle is the voice we need right now”. His history as one of the sharpest minds to ever make a joke about race – let alone a joke period – provides enough cover to have a meaningful debate about the ways in which we debate hot-button issues online. His track record defies any attempt to dismiss him just because some of his opinions are found to be ignorant. He’s already been too smart about too much. And I think it’s a bit disingenuous to yell, “Why aren’t people talking about this?!” on social media, and then get mad when a person talks about it in a way you don’t find to be perfect. 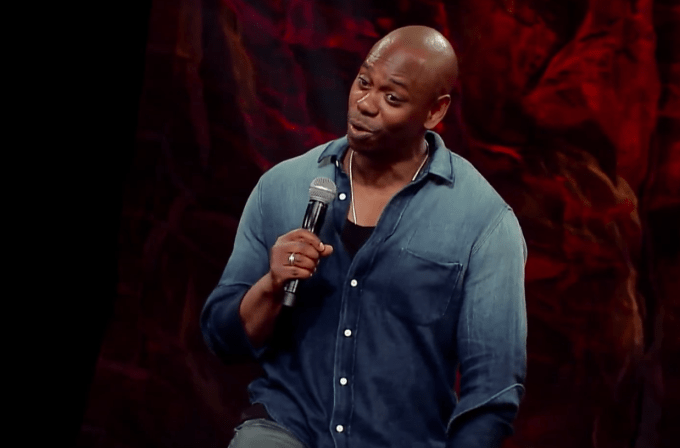 In doing so, he’s getting at a fundamental problem that a lot of people have with the social justice movement on social media. Too often on these outlets you see people calling others “pieces of shit” or “human garbage” or “drag this person” because they’re ignorant about a certain issue. I often see social media members writing off a person entirely for a train of thought that is only a tiny fraction of who they are. And it’s this approach – not the issues themselves – that I think people are rebelling against, whether they know it or not. When you advocate for compassion in the most antagonistic way possible – well, where’s the compassion in that?

And again, that’s what makes Dave so valuable in this discussion – as a black man in America, he’s been advocating for compassion for too long to be accused of not having it. And that reality forces us to grapple with a far more complicated question that I think a lot of social media advocates don’t want to touch because it requires more self-reflection. That question being – why hasn’t Dave gotten the message yet?

Now, this is where it gets tricky and it definitely becomes harder for me to effectively argue my position. As a straight, white, male, there might be people who simply look at my demographics and dismiss my opinion wholesale. They can say I don’t understand and they wouldn’t be wrong. But, they also wouldn’t be totally right. Because, while I’ll never truly understand the pain that a minority group like transgender people feel in America – I do understand what it’s like to be a human being. And in that respect, I certainly know how human beings react to being told they’re dumb for things they don’t yet know or understand. And as much as it sucks to admit, that reaction is not positive.

My very wise girlfriend, who is much keener about human behavior than I am, always tells me, “Do you want to be right or do you want to get what you want?” And it’s a pretty legit truth. One that I repeat to myself almost every day – mainly, because it’s just so damn hard to accept. I keep thinking, shouldn’t the truth be enough? Shouldn’t the fact that I’m correct be more important than being calm and collected??? In a perfect and rational world, yes.

But, human beings are neither perfect, nor rational. Humans are emotional beings; doing their best to think logically over the noise of their own fears and feelings.

So, yes. I wish is it was were as simple as being right. But, as the Mark Twain saying goes, “A lie can travel halfway around the world while the truth is putting on its shoes.” And that dude was super racist! He was also super right (not about the racist part, but about the lies). And you know why? Because lies are almost always rooted in emotion. And if the truth wants to compete it needs to start taking emotion into consideration. As hard as it is, and as nonsensical as it seems sometimes, we need to start showing more compassion for the person who is wrong. We have to understand that a blind spot in their worldview doesn’t make them blind. Otherwise, we risk making more people feel like outcasts (and having them vote in super weird ways), simply because we can’t accept that they’re a little slower figuring something out than we are.

I think that’s Chappelle’s point. And, I’ll go ahead and say that when he argues for a little perspective about Bill Cosby, he might as well be arguing for some perspective about himself. In the bit that he uses to end the first special, Chapelle says about Cosby, “He rapes, but he saves.” I think he could just as easily have given himself a similar tag line…

“I make jokes about rape, but my race jokes saved Comedy Central.”