WESTBROOK VS. HARDEN IS CAPITALISM VS. SOCIALISM – Plus Other Thoughts on the NBA Playoffs

It’s the first week of the playoffs, my NBA brethren! And, because “ball is life”, I spent the entire weekend sitting on my couch, eating burritos, and watching every game as my leg muscles slowly atrophied.

While that may be a problem for my overall health, I’m hoping it was all worth it, because I have thoughts for all the hoop lovers out there! Thoughts!

The first round of the NBA Playoffs is headlined by one series and one series only – the Houston Rockets vs. the Oklahoma City Thunder. I use the word “one” specifically because that what’s this series is all about. It’s the battle of the potential MVPs, and this one has some real Highlander shit going on. And I don’t say that because the first two games take place in the Toyota Center – I say that because…

*lightning shoots from the rafters*

*Harden stirs the blood of his opponents*

“THERE CAN BE ONLY ONE.”

A couple of weeks ago I wrote a piece about how it was impossible to decipher an NBA MVP in close races. The general thesis was that most of us really have no consistent/well-defined process on how to do it, so we end up using the players as avatars for ourselves and arguing accordingly. I also ended that piece by saying Harden would be my avatar for the MVP without giving much reasoning as to why. Watching game one of the series between these two, I definitely gave that some thought.

What I realized was, whether we’re arguing over the NBA’s MVP or the behavior of any person doing anything, we’re really just advocating for behavior that affirms our own worldview. And watching Harden, I realized that this was the main reason I prefer his style of play over Westbrook’s. The founding principles of his game fit more soundly with what I think about the world.

What Westbrook does on the court is far more impressive to the naked eye (I don’t think anyone’s denying that), but for me, what Harden does is far more impressive to the mind. While Westbrook’s style of play offers escapist fantasies about world domination (like a great rap song about getting money over everything), the realities of that style also happen to offend my political sensibilities. Whereas, Harden’s game supports them.

While Harden plays the gears to a greater good.

Westbrook plays with a “pull yourself up by your boot straps (so hard that you fly into the air and viciously dunk on your opponent’s head)” mentality.

While Harden understands the value of promoting rules and regulations.

Westbrook can do it all himself – but only because he doesn’t want to afford anyone else the opportunity.

Whereas Harden looks to other countries for ways to improve here at home.

Westbrook is a capitalist’s dream.

While Harden is a socialist’s utopia.

So, it’s no secret where my affinity lies. I’m a constant advocate of sacrificing for the greater good, because I think it takes more thought and effort to put others first in the pursuit of a more perfect system. The harder path is usually the correct one and it’s why I vastly prefer Harden’s game over Westbrook’s.

Harden is just smarter. And, despite acknowledging that “sports smarts” are almost always the difference between being good vs. great, we still tend to overlook what can’t be seen for what can. Harden is more efficient, more adaptable, and just generally makes better plays (a.k.a. fewer dumb ones). These tiny decisions over the course of a game tend to have a big impact by the end of it. (And even more so in deciding a playoff series).

My general thoughts on the MVP race were somewhat vindicated by game one, as Westbrook’s American work ethic was no match for Harden and D’Antoni’s system of collective good. It was the same system that pushed the Rockets to eight more wins during the regular season, and its solid foundation for everyone involved is the reason why I don’t see much changing through the course of this series. (I picked the Rockets to sweep [out of spite for capitalism], and I can’t see how it would go more than five games.)

A FEW OTHER QUICK THOUGHTS…

If I’m this tired of watching the Clippers, imagine what it feels like to be on the Clippers. Seriously, this team should just forfeit and let Chris Paul go to San Antonio so we can all move on with our lives. At this point, there’s not a single person in the entire league that doesn’t hate this team, and that would be bad enough, except it’s pretty obvious they also hate each other. Just watching them makes me channel my inner Matt Barnes…

What am I looking at here? Why is it only an inch away from his eyebrows? Like, I don’t understand. Could Enes Kanter even go bald? He’s probably the only person I’ve ever seen who would actually benefit from a receding hairline.

If he got a Manu-esque male-pattern bald spot where would it even be? On the top of his forehead? Can he wear hats? Where would his yarmulke go? (And why did it take me so long to figure out how to spell yarmulke?) The mere sight of this Brillo Pad floods my mind with questions. Luckily, we might not have to see it much longer.

THE MEMPHIS GRIZZLIES VS. THE SAN ANTONIO SPURS 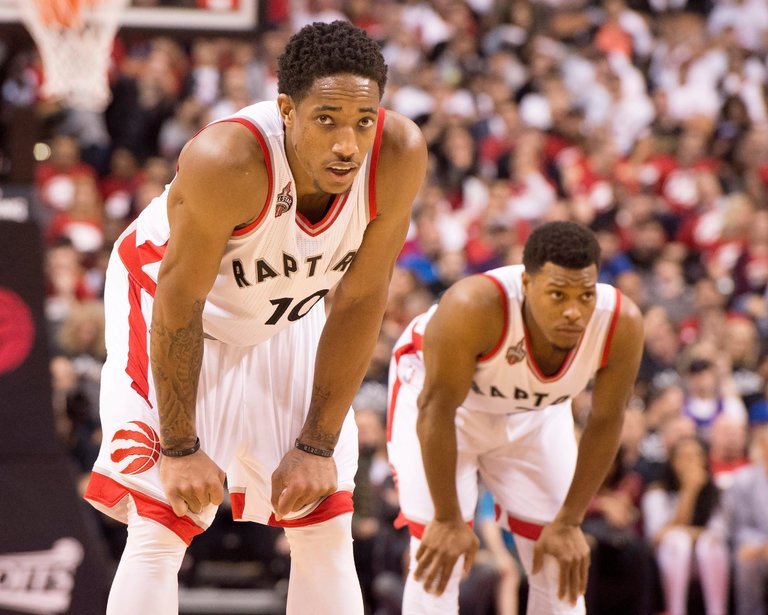 There is nothing more Canadian than the Raptors continuing to blow the first game of every playoff series. They’re now 1-11 all-time and it’s almost like the team considers it rude to even think about drawing first blood. “Win? Against a guest? But, they only just arrived! No, let them get settled in with a victory and then we can begin the series.”

THE BOSTON CELTICS VS. THE CHICAGO BULLS

During the trade deadline, I was a bit baffled that the Celtics balked at the opportunity to get Jimmy Butler. Cleveland was looking vulnerable and Boston seemed good enough to beat them if they could just conjure up a player who could go toe-to-toe with LeBron. Butler was certainly that guy, and considering he’s one of the best 10-15 players in the league (in my opinion), and still in his prime, I was shocked they didn’t give up their Brooklyn pick to get him.

I get that you want to build for the future, but you already have too many players on your team and you risk letting a lot of them walk for nothing. Plus, you’re good now, and if you get to the finals, you might be one Durant/Westbrook/Green injury away from winning the title. Markelle Fultz doesn’t fit with your core now – Butler fits perfectly. All of this will make for an extra-bitter pill to swallow if Butler ends up being the reason the Celts become the fifth #1 seed in NBA history to lose to a #8.

Just another reason to never forget – karma is a bitch.