JAMES HARDEN MADE ME AGREE WITH STEPHEN A. SMITH – I Will Never Forgive Him for That

Last night, the floating upper-torso of Stephen A. Smith appeared on ESPN to go on an adjective-filled tirade about James Harden’s poor performance in Game 6. You can see it here, but the highlights include Stephen A. saying some version of the word quit twelve times, name-dropping the “five hall of famers” who texted him, and wondering if Harden had been roofied. “He was LITERALLY comatose!” Stephen A. insisted. Like, literally. His brain’s reticular activating system wasn’t working and he was lying in a hospital bed at center court. It was weird.

I’m not sure I agree with the way Stephen A. said it – by scream-reading a thesaurus into a camera lens – but I do agree with the general assessment. James Harden quit last night.

Some people were quick to defend him, saying that he was tired from a long season, and that a heavy workload in the series wore him down. That’s not what I saw. I saw someone who looked more mentally fatigued than physically. For one, Harden wasn’t overused in the series – he only averaged 36.6 minutes per game – a total that’s not even in the top 20 for players this postseason. Two, he didn’t look that tired after the game as he sang mediocre Travis Scott lyrics at the Set club. And three, I would’ve been much more willing to consider the fatigue argument if we hadn’t seen him do this exact same thing two years ago.

Harden pulled a similar no-show in Game 6 of the 2015 Western Conference Semifinal vs the Clippers. I guess you could make the same argument – that he was tired – but he was averaging even fewer minutes that postseason. (To give you some idea, going into Game 6, he was averaging 36.2 minutes per game – the exact same amount as Dirk Nowitzki – an 8000 year-old German man.) It’s hard to argue that Harden was tired, especially when some people point to fatigue as the reason the Clippers blew their 3-1 lead. I don’t think both can be true. And, it seems far more likely that this is just who Harden is – a guy who checks out sometimes.

He might’ve proven as much las night. Harden played almost the entire game in a way that was so lackluster it was bizarre. A way that made it difficult to draw any conclusion other than he just didn’t care that much. All the classic Harden symptoms were there. Bad defense being the first and foremost example…

Here he is admiring Jonathan Simmons as he goes into the lane for a dunk:

Here he is asking Jesus to guard LaMarcus Aldridge for him:

Here he is clapping at Pau Gasol for some reason:

Maybe he was trying to distract him? I don’t know. What I do know is that all of these were from the first half.

Harden has always been a turnstile on D, but this season he made improvements. In this game? Not so much. Last night, he was on some vintage, I just got $200 million from Adidas, 2015-2016 shit. And, that would’ve been bad enough, but he was even worse on the other side of the ball. Offensively, he made some decisions that can only be described as, well, odd:

James Harden knows he'll be subject to intense criticism for the Rockets' big loss — and he's ready for it. https://t.co/2vH3hCrYkq pic.twitter.com/wii6Blt2v6

This was the kind of performance that would’ve left me feeling pretty discouraged about the team and its best player if I were a Rockets fan. Which brings me to one last question – do Rockets fans even like James Harden?

Growing up in Texas, there’s a pretty heated Houston vs. Dallas vs. San Antonio rivalry. You hear a lot of love for each team’s superstars – Kawhi, Duncan, Dirk, and even T-Mac – but I hear almost nothing about Harden. That’s anecdotal obviously, but here we are during a make-or-break Game 6 and some Rockets fans in the lower bowl didn’t even show up until mid-way through the 2nd quarter. 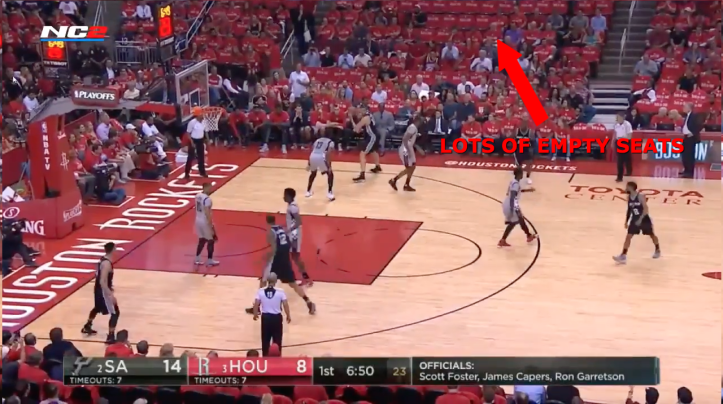 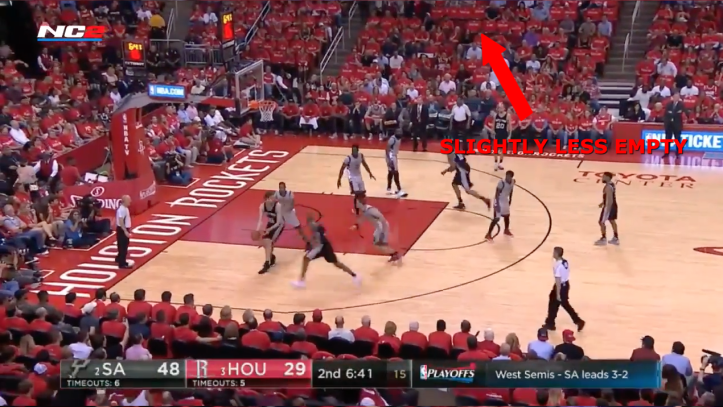 An even closer look reveals that the Rockets were tied with the freaking Pelicans for NBA attendance this year. And, you never want to be tied with the Pelicans in anything, unless it’s the amount of Anthony Davises you have.

That’s pretty terrible for a team that finished with the 3rd best record in the NBA. So terrible that it almost makes you wonder if Houston fans don’t enjoy watching him. Another peculiarity: you might assume that because Harden is one of the 4-5 best players in the NBA, he might be one of the most popular. But, according to the NBA, Harden ranks only 12th when it comes to jersey and merchandise sales (behind Derrick Rose – yikes). His sneakers rank a higher 5th, but that might be due to their popularity in the healthcare industry.

Gonna be the hottest nurses shoe on the market https://t.co/ADabt20Q5b

It’s pretty much impossible to prove something like popularity, but I’m starting to get a whiff of something out in Houston. Last night’s Game 6 certainly won’t help. I know it made me like him a lot less.

He made me agree with Stephen A. Smith. Literally.