Such peaks of greatness are usually defined by a “period”. Picasso’s “Blue Period”. Miles Davis’, um, “Blue Period”. Actually, I’ve only heard of the blue ones. And, unfortunately, that’s a color that simply won’t do for a basketball artist like Stephen Curry. His shot chart is never blue. It’s always a deep, dangerous red. It must be named accordingly.

Steph Curry’s two year “Red Period” was the culmination of a true artist. The purest representation of that word that the NBA has ever seen (in my opinion). True to the word’s definition, Steph revolutionized and redefined the conventions of his medium – and he did so by altering our perception of what was possible on a basketball court. Even truer still – he did it, not with size or an extra-terrestrial level of athletic ability – but with creativity.

It’s a creativity made possible by his complete mastery of everything that can be done on a basketball court. Steph Curry knows every style. He can play every scale. He mastered the game so he can break it.

Earlier this season, it seemed like the red might be starting to fade – and that was a pretty huge bummer. Curry got off to a slow start. Not only that, but when Kevin Durant joined the Warriors, his addition sucked some of the air out of Oracle Arena. Just by joining the team, he made it less fun, too dominant, and removed some its scrappy magic. But then with about 20 games left in the season, Durant got hurt. And, something in Curry came back to life. It’s almost as if Kevin Durant going down was the bitter pill Curry needed to remind him that he’s basically Bradley Cooper in Limitless any time he steps foot on the court.

(Klay Thompson is the TV version.)

Now, with the NBA Finals approaching, and a ferocious-looking LeBron waiting in the wings, Steph is starting to get a little more colorful out west. With the early season woes seeming like a distant memory, the “Red Period” looks ready to rise again. We saw the first glimpse in Game 4 of the Blazers sweep, with Steph showing off the kind of effortless evisceration of his opponent that make you question if he’s even trying. It came with patented flourishes of that game-breaking creativity bubbling to the surface:

And, it didn’t stop there. Appropriately, Steph kept the music going against the Jazz in that series’ close-out game as well – dropping 30/7 in 35 minutes and leaving the game +33. Numbers that will be giving Jazz fans Limitless-like visions as they continue to live in Utah.

As soon as he started to heat up you could feel every Spurs fan start to sweat. They knew the inevitable was on its way and were forced to just sit there and watch, like:

Who else can do these things? Have you ever seen another player – not even in the playoffs game, in a regular game – shoot a 3 and then turn around and look at the crowd as soon as it comes off his hand? I can’t remember seeing that ever – with Steph Curry we see it every week.

His game looks easy, off the cuff, so casual as to seem sloppy at times. It looks like a gift. Like a savant who can’t explain his own greatness, only perform it. But, that couldn’t be further from the truth. Steph’s spontaneity is a product of self-control. And while admiring his game’s effortless appearance, people too often fail to acknowledge the incredible discipline that lays underneath.

A lot of people compare basketball with jazz without really understanding why. They make surface comparisons: They’re both free-flowing. They both require quick decision making. They are both things that Skip Bayless hates. I’ve heard a lot of people make a lot of attempts at connecting the two, but I’ve never heard it made correctly.

(In no place was this more the case than in that weird documentary that Kobe and Spike Lee made – Kobe Doin’ Work. A”day-in-the-life” look at Kobe Bryant playing against the Spurs at Staples Center – it’s a movie that didn’t really say anything. It was basically a Kobe puff piece – and the whole “basketball is like jazz” thing seemed tacked on as a way to make the movie appear more profound than it actually was. In reality, the movie was just footage of Kobe being vaguely dickish to his teammates while Bruce Hornsby music played.)

All the pointing at the improvisational aspects of both jazz and basketball overlook their actual connection – the repetition – the practicing of foundational skills that make that improvisation possible.

When the movie Whiplash came out in 2014, one of the go-to critiques of the film’s was its depiction of jazz. The critique was usually something to the effect of, “Jazz isn’t about playing things perfectly.” But, that critique was completely wrong. Because, when you are learning jazz, perfection is what it’s about. The mastery required to play something perfectly is the preparation that makes all else possible.

There’s a story about Miles Davis that goes something like this… At a gathering of some of the top jazz musicians in the world, Miles Davis got up and when it was his turn to play a solo, all he did was play a single note for an inhumanly long period of time. It was an act of stunting that a spectator might not have gotten, but the musicians who were there most certainly did. He did it because he could. That note was a reminder that it wasn’t about the music he was playing as much as it was about the fact that he could play it any way he wanted to. His years of training had given him better breath than anyone on the planet – and playing that note was simply a reminder of the blood, sweat, and tears it took for him to earn that ability.

Whiplash got this right. And, Steph Curry does too. Just check out his borderline bizarre training regiments. It takes a lot of dedication to look this stupid doing something:

If jazz feels like too archaic of a comparison then think of it this way… A few weeks ago, I wrote the same thing about Kendrick Lamar. That he was so versatile of a rapper that he could literally tackle anything from any angle. That his best skill was that he’d mastered all of them, and there was nothing he couldn’t do. The same could be said for Steph.

His only limitations are physical. It’s been mentioned a million times that his “everyman” stature is the key to his popularity, but going one step further, Steph reminds us that success is an achievement of the mind above all else. That basketball is, first-and-foremost, a skill game, and no matter what we aspire to do in life, skill remains something we can develop and obtain. Curry is reminder that if we set our minds to something – with will, work, and fortitude – we can topple giants.

In other words – it’s been nice to see him making us say DAMN. again. Amongst the rock stars who dominate the NBA landscape, Steph is a reminder that you don’t have to be larger-than-life to come up big. He’s the artist who discovered a different way to play. It’s been nice to have him back in the red. 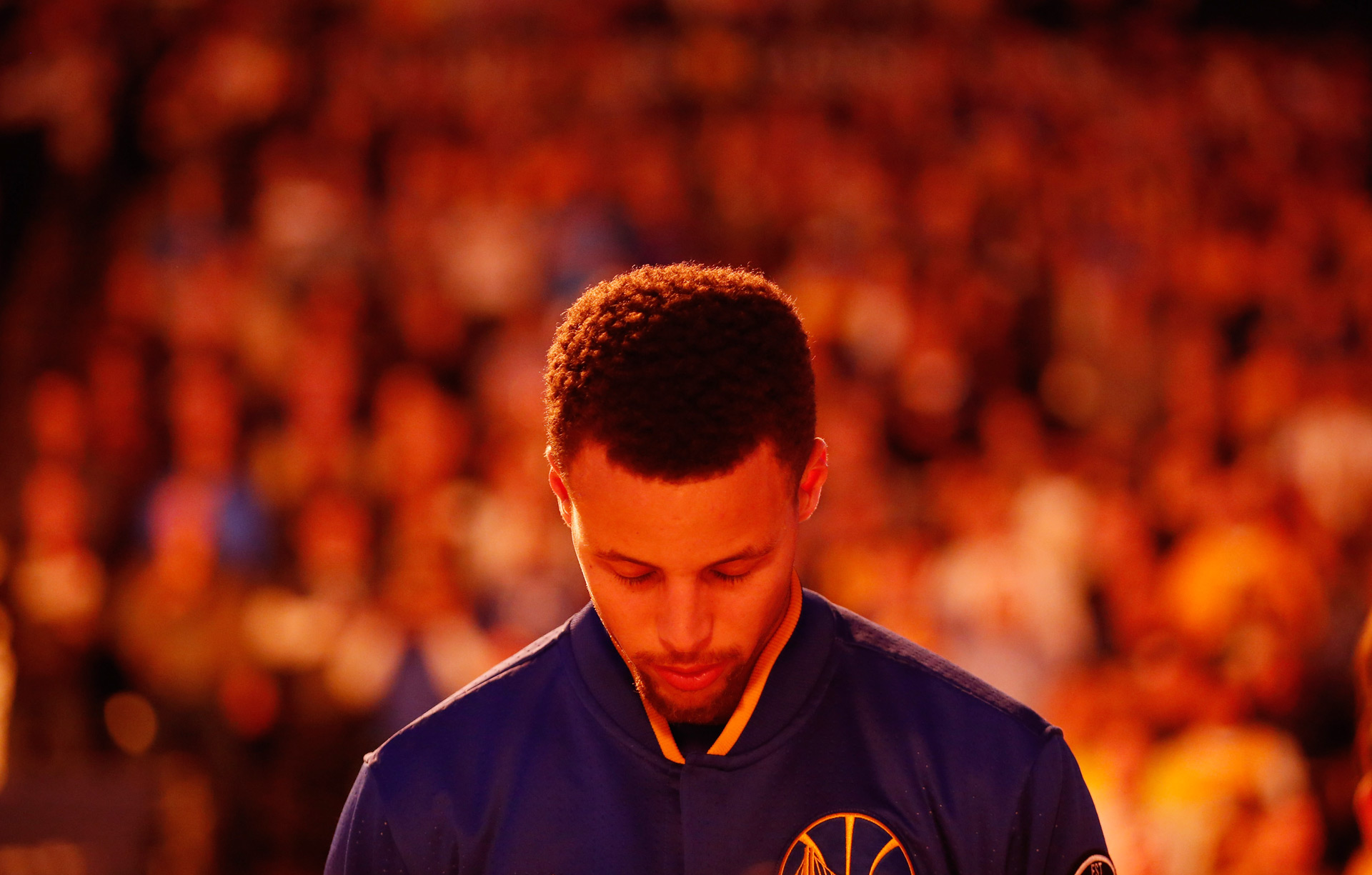