MIKE PENCE’S NFL PROTEST WAS FAKE – Just Like Him

Yesterday, Vice President Mike Pence made the trip to Indianapolis to take in an NFL game. He was there to watch the Colts and honor an all-time great: quarterback Peyton Manning.

But that wasn’t the only all-time great he was there to honor. He was also more than happy to stroke Donald Trump’s ego.

After witnessing – brace yourself – a protest – Mike Pence couldn’t even make it through the first quarter before getting caught in his feelings and fleeing the scene. (Some reports say he made it no further than the parking lot before asking to be wrapped in the American flag and eating a mayonnaise sandwich to regain his strength.)

The quick exit came as no surprise to reporters covering the VP. Mainly because only moments earlier they were told to stay in the van because, “…there may be an early departure from the game”. Mike Pence knew he was going to leave and went any way.

Basically, the dude spent a quarter of a million dollars to go to a football game so he could not watch it. Sweet.

Meanwhile, unrelated to this (but also totally related when you think about it), I found a wishlist on Amazon for the hurricane victims in Puerto Rico. Here’s what $250,000 would’ve bought:

And 1,186,046 tampons for the women of Puerto Rico. (A sentence that would force Mike Pence to take a three-day shower simply by hearing it.)

Look, I know that transporting the Vice President anywhere is expensive (even Indiana), and acting like he could somehow transfer these funds to Puerto Rico is not a real possibility, but the contrast is still telling.

Less than two weeks after Trump started this NFL culture war as a way to distract from his abject failure following Hurricane Maria, Mike Pence teleported to an NFL game to keep stoking the flames. This, after these two couldn’t find a plane to San Juan for a whole damn month.

I’ll spare you the irony of this administration talking about how hard it is to get to Puerto Rico as they jet-set all over the fucking globe at the taxpayer’s expense. Instead, I’ll just reiterate that it took Pence twice as long to help victims of a hurricane as it did to go to an NFL game so he could be mad at black people. (Maybe if NFL games were played on an island surrounded by *gasp* an ocean none of this would even be an issue.)

And in the end, the whole spectacle was just another example of Mike Pence patting himself on the back for something that meant nothing. Another flag-pin wearing politician more concerned with stupid gestures of patriotism than tangible actions that will actually help Americans.

I left today's Colts game because @POTUS and I will not dignify any event that disrespects our soldiers, our Flag, or our National Anthem.

One I could totally get onboard with if you weren’t supporting a President who wants to ban the transgender military members serving our country. Something both you and your president have never done. (Poor little Donny Boy had bone spurs in his foot that don’t seem to keep him from golfing three times a week, even at the age of 71. And Mike? I don’t know maybe he was afraid he’d have to salute a woman or something.)

Mike Pence loves to talk about the troops, clearly, and yet seems to have no problem with talk that might put them in harm’s way. How else could he support a president who is doing everything in his power to start a completely avoidable war with North Korea? One that the Department of Defense estimates would result in the death of thousands of our service members.

I don’t see you tweeting much about that, Mike.

Whether you disagree with the president’s reckless shit-posting, I could care less. If you’re not willing to stand up for what you believe in when it’s inconvenient for you, then how much do you really care?

How much are you really about what you say you are?

No doubt, these kind of empty platitudes are a Republican specialty, but Mike Pence pines to be the most Republican of all Republicans. When it comes to hollow promises, Mike Pence fancies himself as pure as the snowy white hair he probably still lets his mother comb. He is always assuring us that he is a “good Christian man” ready to do everything God has intended. Only he does nothing at all.

Mike Pence will not hesitate to tweet #VegasStrong almost 15 times in the course of a single day. He’ll proudly say that we should come together to help those in need:

As @POTUS says, when one part of America cries out for help, we all come together – to answer their call. #VegasStrong pic.twitter.com/Zn6JgYfkQP

Only when it comes to actually reaching across the aisle to make the lives of Americans safer, he and his Republican brethren seem more than happy to oppose the kind of sensible gun regulation that about 80% of Americans want. All so they can continue collecting checks from the NRA (In 2016, Republicans took $52.6 million in comparison to the $265 total that the Democrats received). Pence is your go-to guy for “thoughts and prayers” and the virtual assurance that there will be another mass shooting in the months to come.

Mike Pence loves to talk about his integrity and how he will deploy his ample supply while heading the POTUS’s new Commission on Election Integrity:

Only problem is it’s a transparent effort to strip minorities and other non-Republican voting classes of a basic American right, so that a shrinking Republican base can continue to win (by cheating). I don’t know about you, but I’m not sure how much integrity there is in rigging our democracy (a conclusion that was also reached by our courts).

And oh boy, does Mike Pence love to talk about his family values. He’ll even give you the photo-op to prove it: 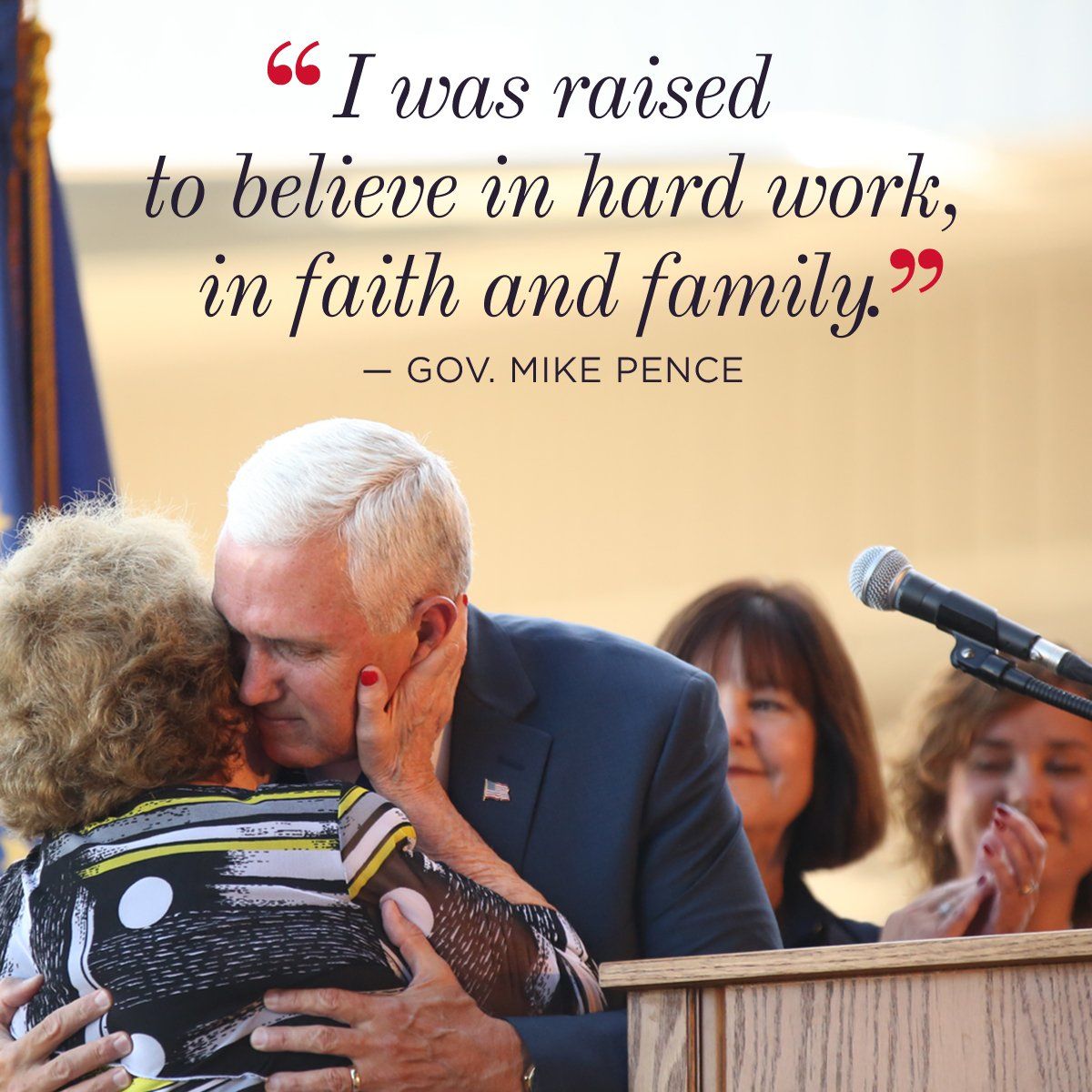 Only problem is he will vote against paid family leave as soon as that photo-op is over. And he has no problem supporting a man who has been married three times, who was caught on tape bragging about sexually assaulting women, and has been accused of sexually assaulting at least 15 women while he was married. (Not that such a distinction matters in the slightest; but even in Pence’s confused mind, there’s no way he could see Trump as someone who was faithful to any of his three wives.)

Mike Pence wants us to believe his NFL protest was honest because he’s honest about everything else.

Only problem is that’s a lie.

Just like the one that brought him there in the first place.