There’s a part in the last episode of Mad Men, where Don Draper goes to this secluded, new-agey facility in California to find himself. He sits in on this group therapy session where a man named Leonard burst into tears and ugly cries while explaining the inconsolable loneliness of modern life. Don seems profoundly moved by this. And, he leaves, seemingly on the verge of some life-altering epiphany – as if he realizes the emptiness of his pursuits in advertising and that he might be responsible for this man’s pain…

But, um, spoiler alert – that’s not how Mad Men works. Because, like 10 minutes later – in one of the trillest examples of American capitalism ever seen on TV – Don straight jacks this dude’s life story and turns it into a fucking Coke commercial. Hey, you feel alone? Well, drink this mass-produced, homogenized beverage, you dusty-ass loser. It’ll make you feel like people like you.

Don was always the smartest guy in the room. He was a business man who was better at art than the artists who snubbed their noses at him. And, he was an artist who was better at business than everyone in the boardroom because he knew he could turn them all into a bunch of weepy-ass Leonards. Don was tight. He was also a gigantic asshole. If only because he knew he had the game to get away with it.

Spoon’s not trying to get away with anything. There’s no need. Their albums are rays of light that must be cherished the way Don cherished his glasses of breakfast whiskey. But, that’s not to say that Britt Daniel isn’t clued in on some of the same seductive tricks. Like Don, he has a preternatural understanding of what sounds good. And, he has the goods to deliver that sound in a way that’s so sharp it cuts through everything else. So, while I’m not suggesting that Britt Daniel is chain smoking Lucky Strikes while he steals the identity of a dead war hero – let me just point out that Britt’s real first name is John.

Spoon’s greatest ability is their near-flawless understanding of their own abilities. It’s not about the music they make – which is very good, don’t get me wrong – it’s about their decisions on what music not to make. World-class editors, they are. True masters at the art of being like, “Hey, you the good part of this song we’re writing? Let’s just make the whole song about that.”

In other words, everything they do has been drilled down to that sweet, sweet essence. And when harnessed, that essence will flood dopamine into your brain like Don Draper working a photo carousel in a way that’s so ill it’ll makes a Kodak exec want go home and hug his ugly children. 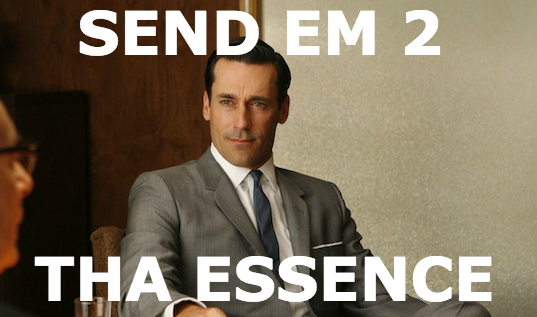 It’s what makes Spoon music’s best marketing firm. Their unassailable quality is their best-known quality. They always know exactly what they want to say and they’ve thought about the best way to say it way longer than you have. Their songs are Nike commercials. Their tracks give you Red Bull wings. Britt Daniel doesn’t shout “I am the lizard king,” he shouts, “I am the Geico lizard!”

Hot Thoughts might be Spoon’s worst album… Maybe? But, saying that about a Spoon record is virtually meaningless. Rest assured – Hot Thoughts kicks a ton of ass. And, whether you like it or not, it will seduce you all the same. Because, while not every song is a commercial – that would be too crass and way more Don Draper than Britt Daniel would ever care to be  – every song is commercial.