I feel like enough people are pointing out the fact that Donald Trump is a crazy old man. He’s running the country exactly like your grandpa said he would during his rant about Mexicans – only he’s doing it for real. If this were a crazy old man simulation – Donald Trump would be playing with that star in Mario Kart that makes you invincible and leaves Toad shitting in his diaper. (Side note: I spend every moment praying his presidency is some kind of simulation).

So, what’s the star? Being rich. It’s clear, now more than ever, that being rich in America gives you a level of credibility that’s untouchable. Donald Trump was born with the star in his hands and he’s been wrecking the course ever since. (Is the music picking up speed or is that just my heart?)

Here we have a dude with what can only be described as “insane hair”, who paints his face a different color than his actual skin, and he’s been given an all-time hall pass because his dad left him $200 mil. Sweet. I know for a fact that if Trump were poor, he’d be walking around the park screaming at birds. Probably the black ones. And then taking to his Twitter account to rant about how they’re trying to steal his hair for their nests. “THESE CROWS ARE BAD DUDES!” 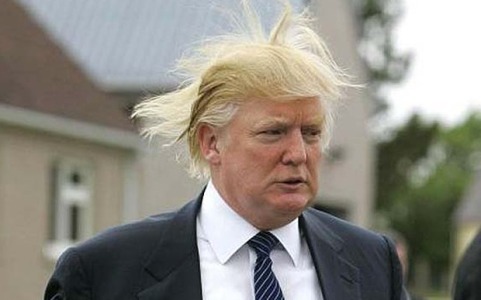 In my heart, I know this is true. I know it’s true, because there are like 3 dudes who live in my building who are exactly like Trump. Only they weren’t born rich. And now, because my building is dirty and they’re always on the elevator wearing sweat pants, no one will elect them to do anything. For real, one guy tried to get voted onto the building’s board of governors, and people were like, “Yeah, no.”

So, I guess what I’m saying is that people in America need to stop thinking that rich people are smart because they’re rich. I’ve met a lot of very rich people and a lot of them are super dumb. They’re not rich because they’re some brilliant visionary like Steve Jobs or Bill Gates. They’re rich because – they were either willing to do things that people with a conscience aren’t willing to do – or they were willing to fill their brain to max capacity with knowledge about some stupid thing that no one else even cares about. “I found a market discrepancy in the distribution of a chemical used to clean factory floors!” Cool, man. I don’t think we should be friends.

Both of these options are sub-optimal. SUB-OPTIMAL I SAY. And these are generally the kinds of people who make our country dull and terrible. It’s been my experience that these people lack the curiosity, creativity, and thoughtfulness to do anything that’s actually smart.

This seems especially true for Donald. He’s always been a boring, uninteresting person – and typically, as you get older, that means you become an angry one. I’m glad he got lucky and his dad was rich. Good for him (I say sarcastically). The problem is the rest of us aren’t so lucky. And now we want to keep rolling the dice with Donald? That’s crazy.