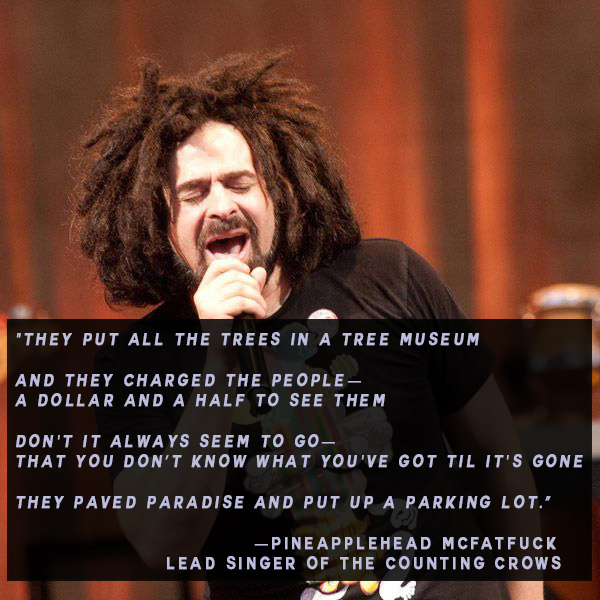 “Big Yellow Taxi” by the Counting Crows is one of those songs that’s so bad it makes you wonder if America was a mistake. It’s also the first thing that pops into my head whenever I think about the Mack Brown era at Texas.

Don’t it always seem to go—that you don’t know what you’ve got til it’s gone?

Probably because it captures my feelings about the time in the most painful way possible. Echoing my sentiments, over and over again, in what are basically the song’s only lyrics.

Dooooooon’t it always seem to goooooooooo—

As if losing the coach of a lifetime wasn’t bad enough, my mind seems hellbent on remembering it like a montage from the worst show on The CW.

They paved paradise—and put up a parking lot.

To say I miss him is an understatement. There are days when I think I’ve spotted him on the street, hunched over and clapping up his five stars; but then I look closer, only to realize it’s just a homeless guy shitting in a bush.

After four seasons under two coaches, 22 wins and 27 losses, I have nothing but love for Coach Mack. Too bad it took a half decade of losing to make me feel that way. It’s sad that Texas football had to become an endless loop of Counting Crows lyrical ass before my brain began to appreciate him.

Only now do I realize that our expectations for Mack were always absurd. Only now do I recognize that our spoiled, whiny behavior tainted the run of a historically great coach. The time has come for me to admit that I would gladly kill anyone in my family for the 8-5 season that got him fired.

Mack was so good he made us think that 10-2 seasons were owed to us and never earned. He let us believe we were the reason the program was good. He made us completely delusional about his success. And make no mistake, it was his success. That has never been more clear.

Too often in the world of college football, programs think it’s the logo on the side of the helmet that earns championships. Or that it’s the booster’s big money that bag the best recruits. Or that a raucous stadium is what makes the team play hard on game day. These are moments that pinpoint the beginning of the end.

The moment a school starts believing its own hype is the moment they rack up five to ten years of losing.

Like, I hate to burst any bubbles, but Nick Saban could go to UMass tomorrow and they’d be in the title game in two years. That’s just the way it is. In college football, coaches win championships. Think differently at your own peril. Think differently and start acting a fool.

Which reminds me—hi, Texas A&M fans! Thanks for sticking around this long! (Glad to see that some Tennessee Volunteers stuck it out as well! I won’t be speaking to you directly, but you should hear this too.)

A&M may suffer from the “Our School Merits Wins” brain disease more than any other program. Not because their expectations are the highest, but because their expectations are the most untethered from reality. After all, the disease has convinced the entire school to call themselves the “12th Man”—like someday the coach is going point to one of them and that person is going to put on shoulder pads and score a fucking touchdown. The disease makes the Aggies talk about themselves like they’re one of the classes of college football—even though they have a laughable number of top 25 finishes. The disease makes them rep hard for the SEC—even though they just joined it, contributed nothing to its greatness (is there any more room on Alabama’s coattails???—check up near the butt), and were a Big 12 doormat for the better part of a decade before joining.

A&M is crazy. A school so full of unabashed sports dorks they simply cannot comprehend how another person might think their school is lame. Because of this, they also cannot accept the fact that the best coaches will never want to be there.

This week, they fired Kevin Sumlin—the most successful coach they’ve had since the tenure of known-cheater R.C. Slocum. They did this because they refused to admit that Kevin Sumlin was about right for their program. Better yet, that he was a step in the right direction (his winning percentage was higher than the school’s overall record). They did it because they refused to overlook some of his mistakes in order to help him build something (instead opting to scream about how much he sucked and trying to force him out at every turn).

A&M treated Sumlin this way because they were absolutely certain they could do better.

Aggies will tell you how confident they are that Florida State’s Jimbo Fisher will be Sumlin’s replacement. But I’m not confident about that either. Remember, this is the same Jimbo Fisher who “showed interest” in LSU last year, only to turn that “interest” into a sizeable raise from the folks in Tallahassee. I think the Aggies should be careful what they wish for.

Sure, I will admit that the rumors of Fisher going to A&M feel far more substantial than the rumors of his departure to LSU did. At this point, Jimbo could be headed to A&M for no other reason than he’s fucked up his relationship with FSU so badly, the entire school is ready to help him pack. But even if that’s true, what then?

Even if A&M gets Fisher, how long do fans think this will really last? How long before Fisher realizes he’s made a horrible mistake and chases a more enticing offer? Two years? Three?

What happens if they don’t get him at all?

If the Aggies whiff on Fisher, it means they will have done the most A&M thing possible. They will have left themselves in a position where they have to hire a coach much worse than Sumlin. They will have ushered in the Chad Morris era and forced me to type a sentence that is almost too sad for my computer to comprehend (and it doesn’t even have feelings). They will have screwed the next four or five years of their program all because they started believing more in the helmet than the headset.

They will have to do something drastic.

If A&M fans can swallow their pride long enough to listen to this Longhorn, I can offer that drastic solution—and it doesn’t involve hiring the 7-5 coach of SMU.

The Aggies can hire Mack Brown.

Before any Aggie heads explode at the thought of Mack wearing a maroon windbreaker, please just take a deep breath and hear me out on this. If you can keep from shouting things like, “That’s not good bull!” you might realize there’s a lot for you to like about this.

First off, this is more possible than you might think. Remember that Mack being underappreciated thing I mentioned earlier? That’s real. Mack turned a shitty Texas program into a powerhouse in the blink of an eye. He took us to Big 12 title games, he won two national championships (yes, I count the game against Alabama where Colt got hurt), and for all of this he got what exactly? To be unceremoniously fired after his second 8-5 season because it didn’t meet the standards of excellence that he created for himself?

Mack was supposed to ride off into the sunset on an overly-drugged steer named Bevo 647A, and instead he was banished to the bowels of ESPN where he has to sit around on Saturdays and argue with Booger McFarland. He has every right to be pissed. I wouldn’t blame Mack if some bad blood exists, and if you mix that with a desire to get back into coaching, who knows what kind of concoction it might create?

Which brings me to my second big point here—Mack should want to coach again. If only because I genuinely believe he could still out recruit every coach in the state of Texas. I have no doubt he sits around every February, refreshing his Rivals.com homepage and watching, annoyed, as the best recruits in the state get hoovered up by foreign powers like Alabama and Ohio State. I’m sure he sighs and waddles off into the next room mumbling things like, “Gary Patterson? More like Gary Ass-erson.”

Say what you want about Mack’s X’s and O’s knowledge of football, but when it came to college football’s most important part, he was a master of getting great talent. He was so good at recruiting that I bet he could show up tomorrow at a handful of schools and steal away two or three big names. That’s how beloved he was by high school coaches and their players in the state of Texas.

If A&M wants to throw a bunch of money around for a coaching staff, why not hire Mack and then pay any price necessary to hire him the best coordinators in the country? While you’re at it, hire one with a ton of future potential. Do what Texas never did; groom a young coordinator as your coach of the future while Mack stocks the war chest with stars before he retires. I promise you, it’d be a better use of your Aggie bucks than renting Jimbo for three seasons so you can maybe play one close game with Alabama.

Finally, not only will A&M fans get a great coach with all the great accomplishments I’ve mentioned above; a proven winner who has done the one thing their program never has—win a National Championship (in the modern era, the only era that counts, you nerds)—but they’ll also get to do the one thing they love more than watching their precious football team.

They’ll get to troll Texas.

If Aggie fans are being honest, they will tell you that they love their “little brother” status. They love having the “big evil empire” to root against. They need their Longhorn tears. They are the Aggie’s lifeblood. (Like, I say this with some level of sadness, but when Texas is bad, there are thousands of A&M fans who watch more Texas games than Texas fans. It’s very real.)

So think about it this way Aggies: if you were to hire Mack you would be creating a lot of Texas tears. If Mack were to go to A&M, it would immediately taint the most successful and memorable era of Longhorn football that the majority of Texas fans have ever known. You’d be hanging a dark cloud over Vince Young, our Rose Bowl victories, Colt McCoy, and everything else that took place in our most recent heyday.

You would really be bumming us out.

And isn’t that what you really want? To have your cake and eat it too? To win but to also make us miserable in the process?

Deep down, you know it’s true. And that admission means there’s only one choice here. You have to hire Mack Brown. And you have to do it now. Otherwise, you risk the same fate as me; hearing hear those same stupid lyrics, again and again, for the rest of your days.

Don’t it always seem to go—that you don’t know how much you’ve got ‘till it’s gone.

It may not be paradise, but it’s better than a parking lot.