According to Politifact—a Pulitzer Prize winning, fact-checking organization—Donald Trump tells the truth 4% of the time. That’s not a typo. That’s a four.

The site offers more. It shows that even if you gave Trump the benefit of the doubt for partial and half truths, his honesty score would only go up to 31%. That means that even by the lowest standards of honesty imaginable, Trump is only attempting to tell the truth 31% of the time. The other 69% of the time he is outright lying. 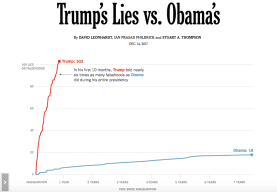 As far as grades go, 31% is a hard F. You could double it and still be failing. If you got 31% on a year’s worth of schoolwork you’d be expelled. Trump has gotten a 31% for the better part of two years and suffered zero consequences. It begs the question: is it really too much to ask that the President of the United States be held to the same standards as a high-school sophomore?

Most Americans dismissed Trump months ago—the way you’d ignore a crazy guy ranting and raving on a city bus. The media, on the other hand, treated him with extreme interest. They acted like the commuter who strikes up a conversation with the guy and rides three extra stops trying to make sense out of his babbling.

I get that Trump is the leader of the free world and all, but here’s the big takeaway in all of this: do we really need information from someone who has none that’s accurate to offer? Like, what’s the point? So we can learn he’s a liar for the 1000th time? We got that. Anyone who doesn’t is never going to change their mind. So why are we still talking about his tweets?

The coverage of Trump (most likely) speaks to a deeper, more corrosive element within our media at large; the fact that, on some level, they probably love Donald Trump for the ratings he brings them. Trump is the logical conclusion of what a for-profit, corporate news media delivers its citizens. Hint: it’s not the truth. It’s spectacle. An approach that explains why fewer and fewer journalists have been allowed on our airwaves to report on the facts (so that people can decide for themselves) to make way for the opinions of ill-tempered pundits.

Obviously, news professionals interested in objective truth had to know that hot takes and bickering was a really trash way to find it. But, they also knew that it was way more fun to watch people yell at each other than it was to hear dry information, so they said fuck it and did it anyway.

For years, they gave a platform to supply-side economic goons instead of calling them out for their thoroughly disproven, bullshit theory.

For years, they gave credence to climate change deniers paid by fossil fuel companies instead of banishing their biased opinions to the furthest corners of our warming globe.

For years, they created a culture of debate around the value of Donald Trump, letting him spew his “birtherism” theories and whatever else came out of his mouth instead of dismissing him as the worthless hack that he is.

Basically, they created a culture where people could lie without consequence. Then, the 2016 election rolled around, the stakes really (really) mattered, and they were shocked by the lack of outrage over Donald Trump’s lying.

Um, what did you think would happen?

In 2018, the media has the power to change all of this. They can show us where their allegiance really lies: with the American people or with their ratings.

But to do this, they’ll have to blackout the president.

Time and time again, our president has proven himself unworthy of the many platforms he receives. That means it’s time for the media to roll out some consequences and take them away; to have a spine and pick a side (this goes for you too, Twitter and Facebook). Doing anything else is to actively aid Trump in his attempts to spread lies, misinformation, and propaganda.

The media needs to start telling us what is actually going on. They need to give us reality, not reality television. People don’t need more hot takes, opinions, or arguments. And we especially don’t need spin from anyone working in the most corrupt administration of all-time.

Like, for real, no one needs Donald Trump’s opinion on anything because there’s not a single thing we should trust him to inform us on. Not one.

If that sounds too drastic, just know, our news divisions have done this kind of thing before. In times of war, they would issue blackouts on certain information deemed critical to national security. They would keep quiet about the placement of American troops overseas, or sit on strategic intelligence until it was deemed appropriate to share.

I see no reason why a similar approach shouldn’t apply to 45. He is the perfect symbol to take a stand against. He is the living embodiment of our nation’s greatest threat.

Everyday in our country, there is a class of ultra-rich political donors who put their old white heads together to come up with new ways to divorce themselves from average Americans. They spend billions to take trillions from us. They have zero interest in our way of life. (Seriously, you know how much you have to hate something to spend billions of dollars trying to destroy it?)

If that’s not a war, what would you call it?

Just because the problems that face us today don’t exist in the same realm as the threats of old, doesn’t mean they’re not as grave. Just because this particular war hasn’t escalated into violence (although, like, Standing Rock, Charlottesville; it’s starting), doesn’t mean it’s overly dramatic to use the word that starts with a “w”. It’s not “inappropriate” for the media to start treating this as what it is.

So please, news professionals, quit sweating through your sheets when it comes to the perceived fairness of fighting back. If you’re worried about being fair, I can tell you the surest way to achieve it: tell the truth. Do the thing that allows people to make up their own minds and decide for themselves. Do the thing that a con-artist like Donald Trump has no interest in doing.

Do the thing that demands you get as far away from the president as is humanly possible.

Or, keep doing things the same way. Keep creating a debate about whether or not Trump is a legitimate president. Keep treating Trump like he’s not the threat to our democracy that he actually is. Keep covering the words of a president who only uses them correctly only 31% of the time.

Either way, the show we watch in 2018 is entirely up to you. Here’s hoping that this one has a happier ending.